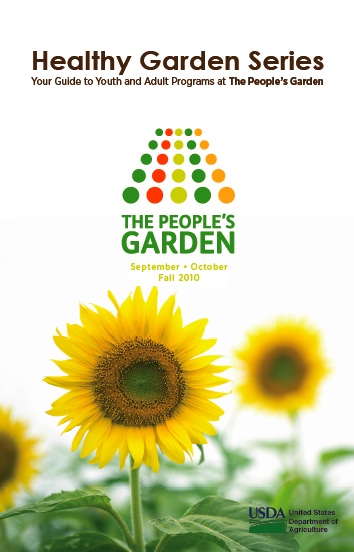 The US Department of Agriculture (USDA) People’s Garden Project continues with some great fall programming. Workshops include instruction on food preservation techniques, cover crop selection, hoop house construction, and more. You can download the 2010 Fall Program Guide for specific details about their offerings. All programs are free and open to the public.

In addition, the USDA Farmers Market will continue through October 29 every Friday from 10 a.m. to 2 p.m. It is located in USDA’s parking lot, at the corner of 12th Street & Independence Avenue, SW. You can purchase locally grown fresh fruits, vegetables, herbs, maple products, baked goods, and much more from local producers from Pennsylvania, Maryland, and Virginia. And on Friday, October 29 from 10 a.m. to 2 p.m., the USDA will hold its Harvest Festival, which include music, food, games, and more. 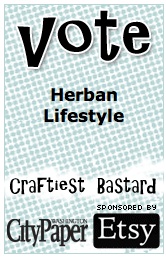 This year, Herban Lifestyle will be a vendor at the Crafty Bastards Arts & Crafts Fair, which will be held Saturday, October 2, 2010, 10am-5pm at the Marie Reed Learning Center at 18th & Wyoming in the hip Adams Morgan neighborhood of Washington, DC (the full vendor list is available online).

And as a vendor, Herban Lifestyle is automatically a contestant for the Craftiest Bastard Contest, being held by Washington City Paper and Etsy.

Votes may be cast online until Friday, October 8. Online voting is limited to one vote per email address. Anyone may use the various widgets provided to encourage others to vote. Votes may also be cast in person at the Crafty Bastards festival on Saturday, October 2nd. There will be ballot boxes located at the City Paper booths and other locations on site.

Please cast your vote here! Thank you for your support! 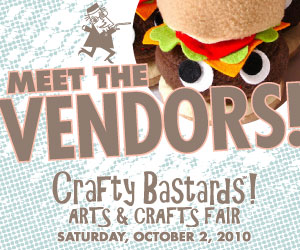 I am looking forward to being a first-time vendor at this year’s Crafty Bastards Arts & Crafts Fair. Two years ago, I attended Crafty Bastards for the first time. Located in Adams Morgan, a lively, fun, quirky, personality-filled neighborhood of DC, Crafty Bastards in more than just a great arts and crafts fair. In addition to about 140 unique and talented artisans from around the country, the festival features live music, amazing food, craft demonstrations, hands-on DIY demos, and a BBoy Battle. I spent a long time watching the technically and artistically adept, gravity-defying moves by the competitors and standers-by.
And I, of course, spent a lot of money at the various craft booths! I recall being blown away by the quality and creativity of the artisans, and overwhelmed by the number of items I wanted to take home. For a sneak preview of the temptingly awesome products that will be for sale at this year’s Crafty Bastards, check out the vendor gallery.

So, if you are around, please stop by and check out all the awesomeness at the Crafty Bastards Arts & Crafts Fair, Saturday, October 2, 2010, 10am-5pm at the Marie Reed Learning Center at 18th & Wyoming in the hip Adams Morgan neighborhood of Washington, DC.

NOTE: This article first appeared in 2008 on my old blog, “Becoming Your Stellar Self.” I am republishing it on the 2nd anniversary of my newest blog, this one, “Herban Lifestyle.”

My first exposure to the blog world was back in 2003, when I learned about Heath Row’s Media Diet. Heath posted short bits on all types of media, often several times a day from his Sidekick. Through it, I learned about the latest in cool communication gadgets, publications and web-related resources. I found out about Ryze and LinkedIn, two of the earliest players in the Web 2.0 world, which became amazing resources for me. To me, Media Diet was the model for what blogging should be. And it inspired me. I started my first blog on Blogger in early 2004.

However, because of intense demands on my time, and a feeling that my posts had to be profound and exquisitely written, I found myself posting sporadically, and eventually closed down my blog. My feeling at the time was that if I didn’t do it extremely well, there was no point in doing it at all. The perfectionist part of me convinced me to stop doing something I enjoyed because I wasn’t doing it up to my own really high standards.

Last year, my interest in blog writing was reignited and Becoming Your StellarSelf was born, a reincarnation of my initial blog’s focus. I approached it with the attitude that I would write about topics that really interest me, whenever I was inspired, whenever I had the time. As a result, I’ve greatly enjoyed the process, and have found my blog to be a great creative outlet.

The other day, I came across a blog whose first entry was back in 2004, followed by a few in 2005, followed by a steady stream of entries from 2006 onward. I thought back to my first blog and felt rather wistful — I didn’t have to shut it down, I could have been happy writing when I had the time and inspiration, I could have accepted something less than perfection, and it would have been fine. Then I remembered that, this time around, I am doing exactly that.

Recommended Reading:
* Cons of Perfectionism include self-criticism
* The many faces of perfectionism
*An article by the American Psychological Association that includes tips on overcoming perfectionism as it relates to writers’ block (written for grad students, but interesting anyway)