My "Less Rhetoric, More Cowbell" sign for the Rally to Restore Sanity, ©me

In an interview last week with Michel Martin on “Tell Me More,” Sheryl Crowe said that she was tired of people in the media and politics being “mean.” She said she has no desire to listen to people using degrading, hateful, intolerant language about those whose ideas are different form their own. I agree. I have no patience for the many attack ads that have been floating around this election season, and I get very annoyed at people of any political or religious view who bolster their arguments by dehumanizing or belittling the other side. It moves us away from real, nuanced dialogue into a simplistic, dangerous place where things are reduced to being labeled as “this or that,” “good or bad,” “right or wrong.” It prevents us from trying to understand our commonalities, in addition to our differences, and moves us away from a place of mutual respect, “let’s agree to disagree,” into a frightened, myopic place of “us versus them.”

And that is why I was so thrilled to have an opportunity to attend Jon Stewart’s Rally to Restore Sanity, balanced out, of course, by Stephen Colbert’s March to Keep Fear Alive. The 24-hour news cycle, competition for ratings, and tough economic times, have created a media climate where Americans are being portrayed as existing on one or the other end of the political spectrum. I was really eager to be part of an event that represented those of us who don’t hold such extreme views.

a view from somewhere in the middle

The prevailing attitude at the Rally was happy, laid back, let’s all have a fun time together. Despite the huge crowd, it was polite, pleasant, and peaceful. I saw no incidents, no arguments, no drinking or use of illegal substances. Mild chaos only ensued after the Rally ended as the crowds tried to move off of the Mall and disperse throughout DC. Clearly, they hadn’t prepared for such a large attendance, as roads that weren’t officially closed became clogged with pedestrians. Police cars moved through, trying in vain to get people out of the street. There simply wasn’t enough room on any of the sidewalks to accommodate the throngs. We walked seven blocks to our favorite, small, out-of-the-way restaurant in DC, which rarely has a wait, only to find a line of people out the door and down the block! The situation was the same in all our fail-safe eateries. Clearly lots of revenue was being pumped into the DC economy yesterday.

While the crowd was primarily white, that is unsurprising given the demographic makeup of this country. Just in my area of the crowd, I saw people representing every ethnic group. I was also impressed at the great diversity of age among attendees. Many older people were there with their children, as well as every age in between. Some very elderly were in wheelchairs being pushed through the crowds, like the 94-year-old veteran shown on CSPAN’s coverage of the Rally.

this group traveled a long way to express their views 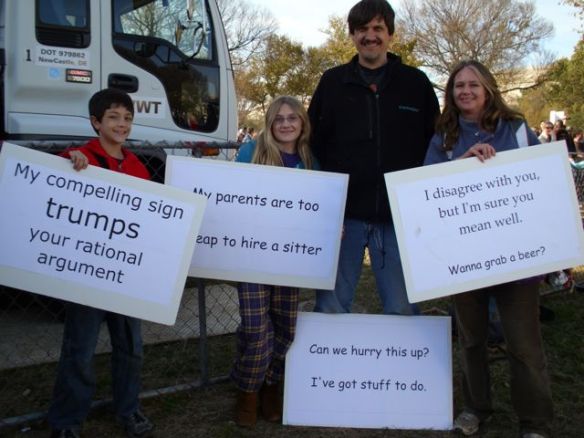 the family that rallies together

There were a vast number of creative, witty and poignant signs that the Rally attendants had created. I wish I could have photographed them all, but there were far too many, and given the size of the crowd, I was only able to see a small portion of them. Many people have uploaded their images to the Rally for Sanity website, and you can see photos of them here. 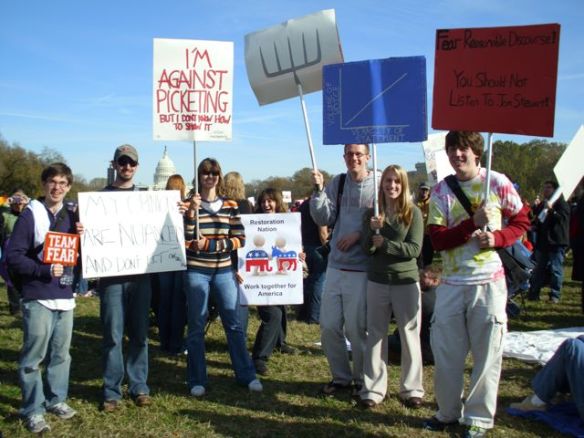 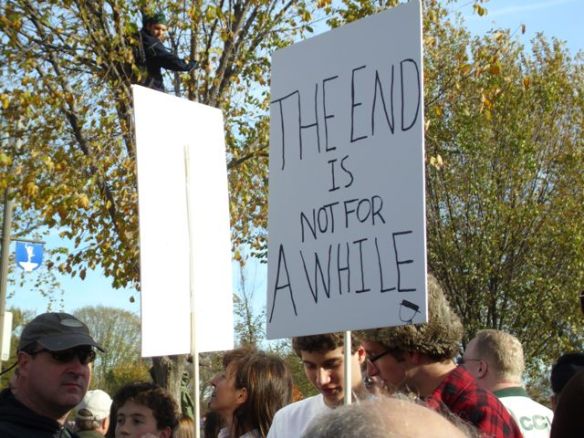 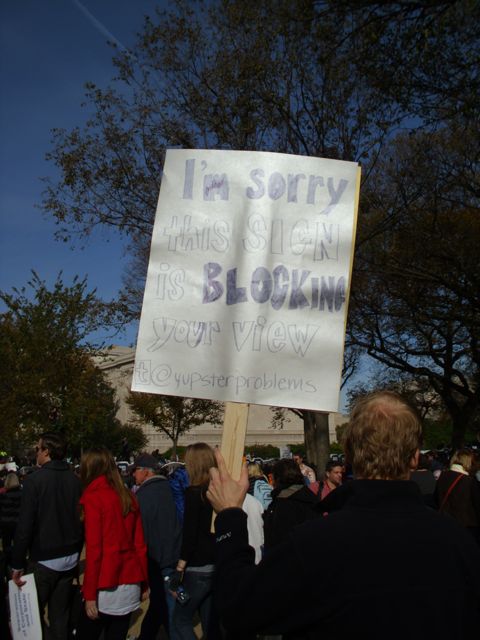 The programming, like the Daily Show and Colbert Report, was an eclectic mixture of entertainment, silliness and poignant social commentary. (You can read a blow-by-blow recap of the program on the Comedy Central website, or read a great description and see video clips on the MTV website). Jon Stewart ended with a short eloquent, optimistic closing statement (you can see the video here). Throughout the speech, he stopped short of being too moving or preachy by interjecting something silly, resulting in an almost, but not quite, rousing oratory promoting civility, understanding, and moderation. His point of avoiding looking at others as one-dimensional caricatures, as we are so often portrayed by the 24-hour news channels, and realizing that despite our differences we must all work together, was nicely delivered and well received. 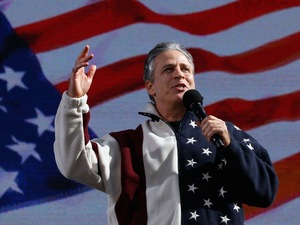 I came away from the Rally feeling as if I had been a part of something, and that, in the true American spirit, I had been given an opportunity to express my views. It would take a while for me to explain exactly what my views are, since they cannot be packaged into neat little sound bites (well, except for those that I put on my signs), and that’s what the Rally was all about. 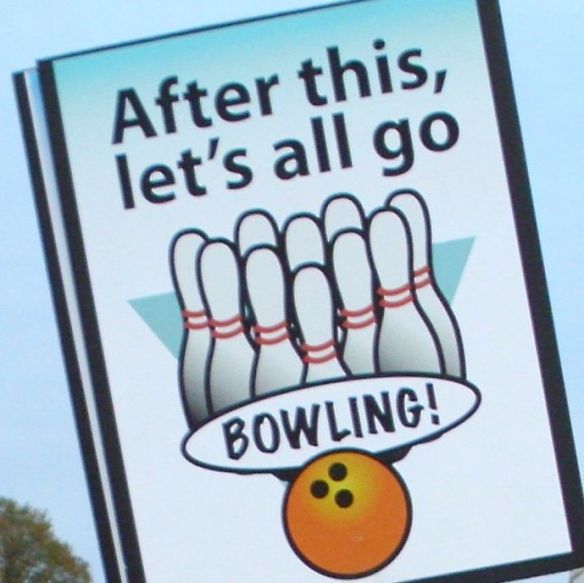 Margaret Barry, in her eloquent comment on the NPR blog post on the Rally said, “I was reassured by the large numbers that wanted to express what Jon Stewart finally got to at the end of the rally: we should not be dragged around by the media and its reporters/pundits – the line is eroding daily; when we step away from political parties and the interest groups that influence them, we can connect with each other, share ideas, respectfully differ, seek leaders who call on us to do what we have taken the time to understand is right, and get things done.”

Today I am delivering these gift bags to a client who order them for a bridal shower she is hosting this weekend. I am particularly happy with the way they came out, so I wanted to share some pictures with you. I have created a few gift bags now, and have discovered that I really enjoy coming up with the theme and customized labeling. This set includes a mini organic sugar scrub, organic Dolce de Limone lip balm, and a sample of my new Herban Lifestyle Naked line Pretty Pink Facial Masque.

The items are packaged in compostable cellulose bags and tied with paper ribbons. As always, the labels are printed on 100% recycled paper, and the containers are recyclable.

I have decided I will start to offer these through my Etsy shop. Please feel free to contact me if you would like more information on pricing, timing and customization!

There is also a new Green Business Conference Pavilion, which will feature speakers on various topics of interest to business owners. I will be speaking on Sunday, October 24 at 1:00. Please stop by if you are at the Festival!

Here are some of the featured activities:

Annie’s Green Kid’s Zone will offer fun and creative hands-on activities organized by the National Children’s Museum. Kids can create wearable water bottle jewelry and creations, participate in a recycling obstacle challenge, bowl a recycled strike, make a jump rope out of plastic bags, build a city, enjoy a fair trade chocolate party, learn about the busy futures of recycled objects and learn how the National Children’s Museum will be a green organization!

Mother Earth News is hosting a Seed Swap sponsored by Southern Exposure Seed Exchange. If you have seeds to trade please organize and label them according to the guidelines posted on our website. Swappers will receive a goodie bag from Mother Earth News and Southern Exposure Seed Exchange. There will also be seeds for sale for those who don’t have any to swap.

You will have an opportunity to recycle your family’s old cell phones through T-Mobile’s Mobilize™ program. Donate your unused cell phones for recycling with T-Mobile at the Washington D.C. Green Festival and you will get free admission to the festival. The first 250 people to recycle a phone will also receive a free organic festival T-shirt. All makes and models of devices will be accepted. 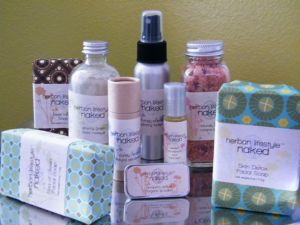 The key to healthy and beautiful skin and hair isn’t methylparabens, an ingredient found in almost every face wash and shampoo in the United States, but in knowing that the products you use have no toxic ingredients at all!

With the rising trend of consumers purchasing healthy products to use in their bodies and on their skin, more and more companies are jumping on the “natural” bandwagon and mislabeling products to keep consumers happy.  According to Annie Leonard’s documentary, “Story of Cosmetics,” terms such as “herbal,” “natural,” and “organic” have no legal definition, so products claiming these may still contain ingredients such as petrochemicals (ingredients made from crude oil), parabens, phthalates and other toxic ingredients known to cause cancer, asthma and other reproductive disorders.

But little do they know that these consumers have a plethora of information at their fingertips.  With recent documentaries such as “Story of Cosmetics,” round-the-clock access to search sites such as the Skin Deep Database, education and advocacy provided by the Campaign for Safe Cosmetics, and events such as Herban Lifestyle’s Product Launch and discussion, consumers have more opportunities for information today than they did even a few years ago.

“There is so much natural beauty in the world there for the taking. My new line celebrates the gifts of the earth and the naked beauty in each one of us,” says Kearns. “Each product is designed to provide luxurious body care while using rich natural ingredients and making a minimum impact on the earth.”

To RSVP or for questions about the event, please email ferraguteventgroup [at] gmail [dot] com. The first 50 RSVPs get VIP tickets, which include goodie bags and drink tickets. 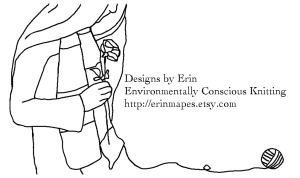