I spent the weekend in SoHo. I was there for the BUST Magazine Craftacular and Food Fair, which was held on May 21st. I spent most my Saturday surrounded by awesome artists and crafters, taking in their amazingly creative works. On Sunday, my husband and I walked around checking out the various boutiques. I took note of the use of fabrics, shapes and textures displayed throughout the neighborhood, inspired with ideas for new designs and packaging for my products.

But what surprised and delighted me the most was the art I found on the streets. My favorite was the discovery of a bicycle that had been ambushed overnight with a cover of pastel crochet in a camouflage pattern. I marveled at the beauty and awesomeness of the work, while also sympathizing with the owner who would have to do quite a bit of snipping to be able to actually use it. 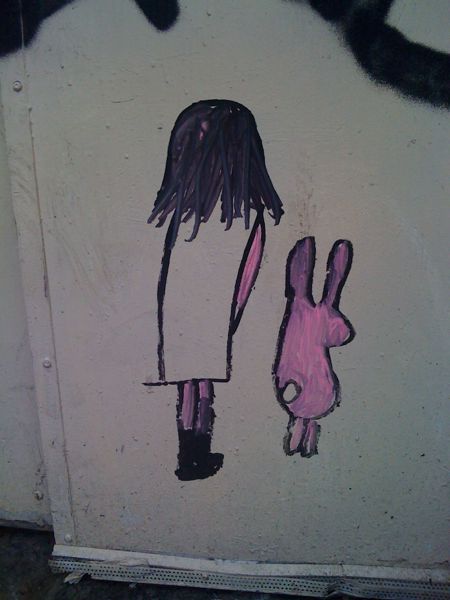 On one wall, I saw a magnificent graffiti mural, which I didn’t photograph (I didn’t think I could do it justice with my iPhone). But I did capture this sweet piece that I found on a door. I love the simplicity of the lines, and it sparked my imagination to think of things the girl and her rabbit might be looking at.

Later in the afternoon, we headed up to Central Park to check out Japan Day. There were several things to see, but what caught my eye was this collection of origami cranes that people were folding and donating, with the goal of sending 1000 paper cranes to Japan to show solidarity with the victims of the earthquake/tsunami.