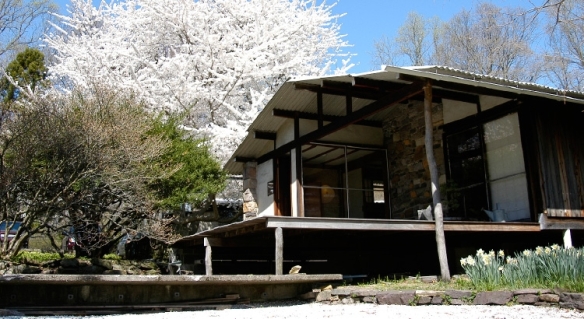 In February, my in-laws took us to see an incredible museum and woodworking shop in New Hope, PA. Among the large, wooded residential plots of land sits the homestead of George Nakashima (1905-1990), who is considered to be one of the world’s greatest woodworkers. During his lifetime, Nakashima came to be known as the “Elder Statesman of the American Craft Movement.”

During our visit, we had the great pleasure of speaking with Kevin Nakashima, George’s son, about his father’s work. We found that not only was George Nakashima a master woodworker, he had started out as an architect and was sought after for his talent in integrating building design into the aesthetics of the natural surroundings. Kevin showed us photographs of the construction of a Benedictine Abbey, called Christ in the Desert, for which his father was the original architect in the 1960s. Last month, I had an opportunity to visit the abbey while on a trip to Santa Fe. More on that in another post… 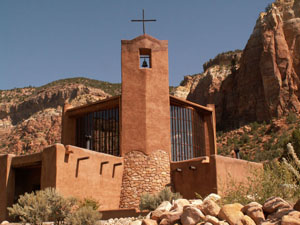 We were given tours of most of the buildings on the homestead. Nakashima’s love for nature was evident in the structures, which were all built to take advantage of natural light and passive heating and cooling. And his furniture is all built from fallen wood – no trees are cut to make his pieces. I found out that George Nakashima Woodworker, SA is a member of the Sustainable Furnishings Council (SFC). Members of the SFC pledge to: eliminate unrecyclable content and primary materials from unsustainable sources; endorse Life Cycle Assessment as the best method for analyzing the environmental impact of their products, and a verifiable chain of custody as the only acceptable method for tracking wood flow; and support the trip bottom line of People-Planet-Profits and promote awareness of best practices throughout supply chains. 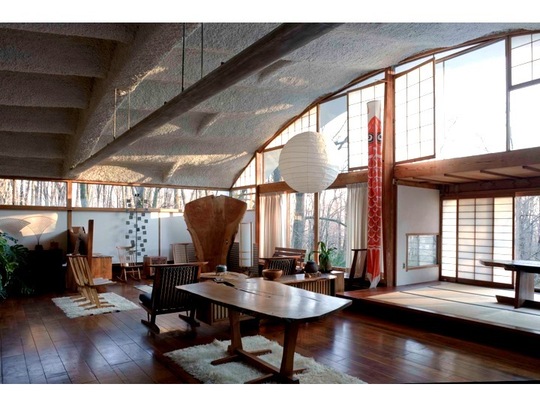 What Kevin didn’t tell us was that his father had learned the art of traditional Japanese woodworking and the use of found materials while interned at Camp Minidoka in Hunt, Idaho during World War II. It was not surprising that Kevin did not want to talk about this painful period in his father’s life. It was also not surprising that Nakashima had developed a new level of artistic skill while in the camp. In 2010, I was able to view an exhibit at the Renwich Gallery entitled The Art of Gaman.

“Gaman means to bear the seemingly unbearable with patience and dignity,” “to grin and bear it,” accoriding to Delphine Hirasuna who curated the exhibit. (Actor George Takei defines gaman as, “To endure with fortitude and dignity,” and he is currently working on creating a Broadway musical, Allegiance, based on his experience in an interment camp as a child). It was during this time that Nakashima perfected the discipline of patiently working with the natural grain and contours of the materials to achieve perfection in form.

While in the camp, Nakashima learned woodworking from Gentaro Hikogawa using found materials (since they were not allowed to bring anything with them, the detainees used materials that came from garbage found in the camps as well as from the natural environment). Hikogawa taught him how to use traditional Japanese hand tools and joinery techniques.

In 1943, Antonin Raymond, an American architect who had collaborated with Frank Lloyd Wright on the Imperial Hotel (and with whom Nakashima had worked before his internment) sponsored Nakashima’s release from the internment camp and invited him to stay at his farm in New Hope, Pennsylvania. In 1973, Nelson Rockefeller commissioned Nakashima to design and build 200 pieces for his house in Pocantico Hills, New York. Nakashima went on to build a reputation as one of the best 20th century American Art furniture designers. 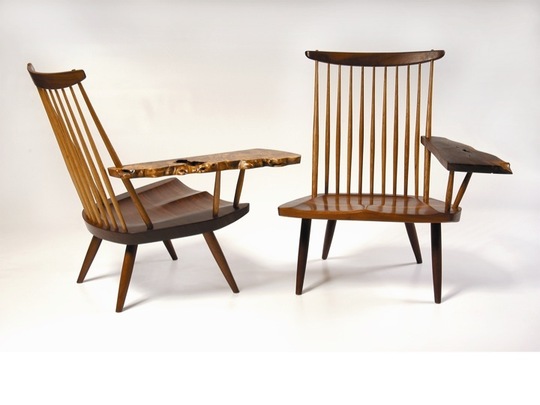 He also went on to become a dedicated advocate for peace. As part of his Foundation for Peace, Nakashima’s magnificent Peace Tables, made from huge slabs of wood, reside in Cathedral of St. John the Divine in New York City, Russian Academy of Art in Moscow, Unity Pavilion in India, and one is being created for the Desmond Tutu Peace Centre in Capetown. On June 3, at 3:00pm, they are holding a concert, “Mostly Motets for Peace” to benefit the Nakashima Peace Foundation. 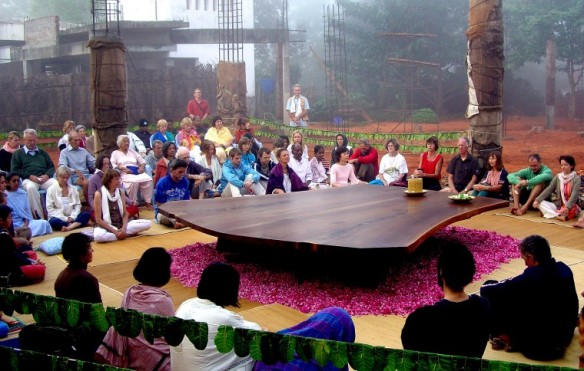 And for an album of gorgeous photos of George Nakashima Woodworker, SA as well as several of his signature pieces, I highly recommend this wonderful feature article on  his daughter, Mira Nakashima-Yarnall, in Apartment Therapy.